Federales admit having been lying for many years.
The administration of Vincente Fox it truly working towards their goal of eliminating the corruption in government. Now, the Fedarales have been forced to admit that they might not have actually killed "Pancho Villa" all those years ago. In the last month, "Pancho" and his partner "Lefty" have been reported to have been terrorizing the border towns of Mexico. Pictures received recently at Intergallactic Headquarters indicate that "Pancho and Lefty" are alive, well and rumored to be staying with Elvis somewhere in far south Texas. Analysist have speculated that "Pancho" might have teamed up with "Lefty" again after all of these years because: "he can sing the blues, all night long like he used to...". The two are reportedly singing songs about the new way of life along the border like "Old age and treachery always overcomes youth and skill..." Terrified citizens along the border have taken to calling the outlaws as "Dos Snowbirds" and are petitioning the Mexican government to pass legislation requiring the border to the USA be strengthened to keep such riffraff out of the country. The Mexican government has enlisted the consulting help of the seasoned professional "North Texas Coast Watchers" as they just happened to be visiting at the time. In his professional opinion, Ray says: "They're not dangerous, don't worry! Except maybe that one on the left. He tried to hit me with a Velvet Hammer." 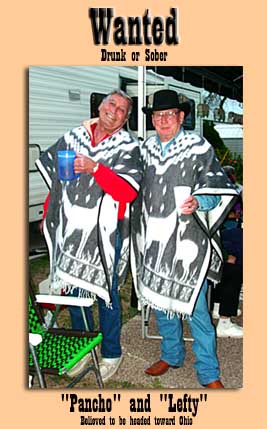 These events seem strangely connected to the recent visit of the "Veteran Travellers" and the "North Texas Coast Watchers" along with the entire staff of "Zincks East" and many others. I'll schedule interviews with KP and Ray upon their return for detailed information of the sheer terror of being there during this obvious time of crisis, (I'm working on the Wolf Blitzer reporting style because I just like the name, sounds like a reindeer gone bad).

Breaking News
One of the "Veteran Travellers" has been abducted by Pancho. This photo shows Pat being held hostage by Pancho while he's laughing and dictating a ransom note to Lefty. See how he's pointing the drink at her to keep her quiet? That's NOT just a Keystone Light either! Looks like the real thing to me. The WCST is now taking contributions to pay the ransom. Please send your $.02 cents worth to Intergallactic Headquarters and we'll arrange for her return sometime in early March. She'll probably bring Pancho back with her, as the "Hood" isn't too picky about who moves in, (See "Intergallactic News" section). 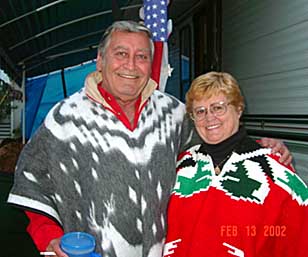